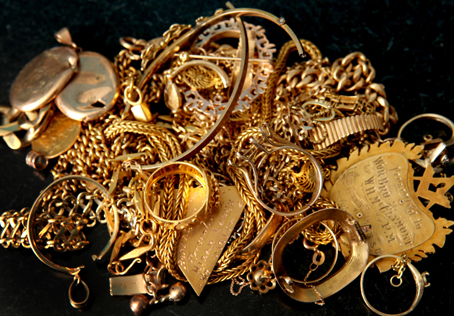 Gold is one of the first metals used by man, dating back to the cave dwellers. For centuries, gold has been coveted for its unique blend of rarity, beauty, and near indestructibility. Nations have embraced gold as a store of wealth and a medium of international exchange; individuals have sought to possess gold as insurance against the day-to-day uncertainties of paper money.

The ancient Egyptians became so adept a working gold that they were able to hammer it so thin that it took 367,000 leaves to make a pile one inch high. Vessels made as early as 3500 BC have been found at Ur in Mesopotamia. The quest for gold stimulated European explorations and conquests in the Western Hemisphere, and its discovery has led to many a gold rush. The first gold rush in America took place in Georgia in 1828. The California gold rush of 1849 brought settlers from all over the world to the west coast.

For hundreds of years, man has tried unsuccessfully to make gold by artificial means. This science was known as Alchemy. Modern scientists have succeeded in this quest by extracting gold from seawater, and the atom smasher can make gold from lead. All the gold produced commercially still comes from the earth and has become a very important and very carefully supervised industry for the gold producing countries of the world.

Gold has been valuable for so long primarily because of its scarcity. This metal owes much to its physical properties of beauty, softness, resistance to chemicals and density. Gold has a natural beautiful yellow color and a soft metallic glow. Scientists describe gold as being extremely ductile as it can be drawn as fine as a human hair and malleable because it can be hammered and rolled into thin sheets. No matter how it is twisted, no matter how thin it is rolled or drawn, it still retains its remarkable resistance to rust and tarnishing.

COLORS OF GOLD: Yellow, Green, Red and White are produced by variations in the alloy. Silver and zinc tend to give a green color: copper a reddish color and nickel for a white color.

GOLD FILLED: made by joining a layer (or layers) of gold alloy to a base metal alloy and then rolling or drawing to the thickness required.

ROLLED GOLD PLATE: the same as gold filled, but usually of lower quality

GOLD ELECTROPLATE: made by electrolytically depositing fine gold on base metal.

GOLD SOLDERS: usually 2 to 4 karats less than the gold on which they are used.

A PENNYWEIGHT: the twentieth part of a troy ounce. The name originally applied to the weight of an Anglo-Norman penny.

A TROY OUNCE: about 10% heavier than the common avoirdupois ounce. There are 14.683 ounces troy in an avoirdupois pound

FIRST STEP: File a deep notch in the piece to be tested and apply a drop of nitric acid. If the piece is plated gold and you have cut through the gold surface it will turn bright green. Some articles are plated over silver base, be aware, file deep to expose the white metal – the reaction will not be green but will be a pinkish cream. If the piece is solid gold but less than 10 karat there will be a slight reaction. If it is more than 10 karat there will be little or no reaction.

TO FIND THE KARAT: If the piece is solid, file a clean spot and rub the spot on the stone making a distinct mark. Because it makes a mark equally heavy with one of the test needles – the one nearest in karat and color to what you suppose the gold to be. If the piece has a karat marking, start with a needle of the same karat.

Apply acid to both markings at the same time. Use nitric acid for 10 karat or less and aqua regia for higher karats. Then watch the action of the acid, a dark color spreads over the marks. If the needle marking reacts sooner than the other, wipe the stone dry and retest with a higher karat needle. By trial, until you find a match in reactions, you can determine the karat. If the acid you use acts too quickly to observe accurately, use diluted acid which has a slower reaction.

Things To Look Out For In Testing Old Gold

Do not take too much for granted. Extra time in examining and testing will avoid mistakes which might otherwise wipe out your profit.

STAMPED KARATS: Do not depend altogether on the karat marking. Manufacturers are allowed a tolerance for variation by law. Test to make sure. Watch for higher karat plate on gold of lower karat.

SOLDER: Watch for it and make allowance in establishing the value. Soldered joints are usually 2 to 4 karats less than the article itself.

CHAINS: Some chains have considerable solder in them, especially fine chains with small links. Examine links carefully, some may be made of very heavy plate or plated on a silver base. Watch for repairs, a lower karat or plated links may have been substituted.

WATCH CASES or any article made of several parts – be sure to test each part separately. Sometimes the case size stamp is mistaken for the karat mark. Usually karat stamps include K or Kt.

ROLLED PLATE: Be sure to file a deep notch. Rolled plate has a value proportionate to the quality of the plate.

GREEN GOLD: Reacts more slowly to acids than yellow gold because of a high percentage of silver used in the alloy. Test with green gold needles.

WHITE GOLD: Reacts more slowly to acids because of nickel or palladium in the alloy. Test with white gold needles.

STAINLESS STEEL: And other white base metal compositions made into jewelry have been fraudulently stamped and sold as white gold. They weigh less by volume than gold and usually can be detected by the “fell of the weight” In filing, stainless steel is also much harder.

150% Guarantee - The highest payout on the internet Our payments are 150-200% more than most other gold and diamonds buyers Your items are exactly weighed on a calibrated scale Payments are made on the same day as per NY Gold Spot Price of the day No minimum weights - No hidden fees Diamonds are graded as per GIA Specifications, using state of the art equipment Payments are determined by size, clarity, color and cut, giving you the most honest prices Forty years of experience in the purchasing scrap gold, diamonds and estates.

100% Guaranteed Merchandise Return if not satisfied with offer!

ALL INFORMATION IS ENCRYPTED, SECURED, STRICTLY CONFIDENTIAL AND NEVER SOLD TO THIRD PARTY